It all started in Belgium.

Four girls, one city, and a beer that changed everything.

Le deux filles <the two girls> from France arrived first and got to do a little bit of exploring Brussels on their own. We arrived midday and although it was a bit cold for us, the fall leaves were beautiful and the architecture was stunning. 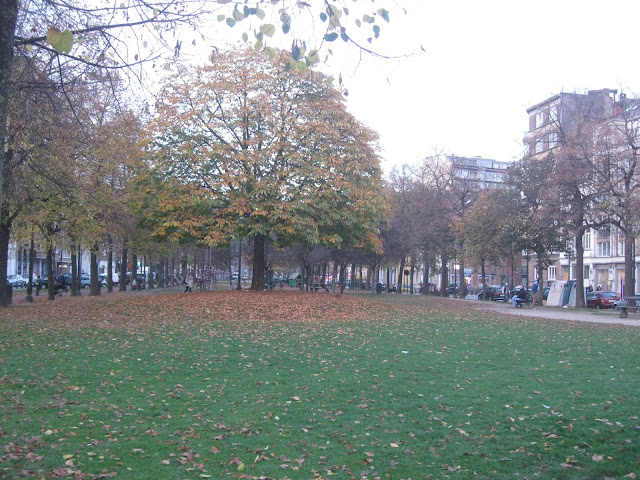 We strolled around until nightfall, finding a quaint sushi restaurant for dinner and then checking out the famous Delirium bar in the city center which is known to serve hundreds of different kinds of beers with many novelty flavors such as pineapple. As was recommended to us, we chose the Delirium Red beer which was a vibrant red color and tasted like sweet cherries. It came in a glass with a pink elephant on it and it became an instant hit for both of us. We chatted the night away, most definitely feeling a bit tipsy as the beer is a surprising 8% alcohol, while the bar kept getting busier and busier. Finally, we heard from los dos chicas who had arrived at last! We couldn’t wait to see them- and enlighten them about our new favorite beer, and city!

Once reunited, the next day we got the chance to see all that Brussels had to offer. We had heard about the famous Atomium monument and decided to walk there- turns out it was about seven miles or so but we had a lot of fun on the way there…

The next 2 nights went down in history of having the most fun ever in a foreign city, each time starting with a Delirium Red beer. You just couldn’t beat something that tasted so delicious and was nonetheless a beer! Now that’s killing two birds with one stone! The nightlife in Brussels was truly one of a kind, but most importantly we bonded as friends and thus followed lifetime friendships for each of us- all linked together by a shared Instagram account named: Delirium Red highlighting just what happened in Brussels and a whole lot more…

As our short trip came to a close, we wished each other the best as we were going to be finishing our semesters abroad. We’d all see each other back at our home universities again real soon. We all said that this trip had been our favorite abroad since we all got along so well, but perhaps it was due to our beloved Delirium Red beer, that ultimately brought us together. The best of times clearly come from unprecedented moments and that’s why you should always live your life ready for an impromtu occasion! Brussels was a fantastic city, but this dynamic quad could have had fun anywhere!

A couple months later, a profound moment occured when Isabel and I found Delirium Red again- in France! We thought it was strictly sold in Belgium and that’s what made it so special. We were at the Grenoble Christmas market when we saw a stand selling Delirium brand beers. We couldn’t believe it! Of course we had to get one, and the taste was still the same- just as refreshing, sweet, and satisfying- in bottle form, and perfectly fitting for the holiday season. The next time our favorite beer popped up was ON TAP at a bar in Aix-en-Provence, France.

Turns out, Delirium products are very popular and are sold all over the world! That meant we could find it back home in the U.S. too, and that’s just what we did to keep the good times rolling. Stay tuned with the infamous Delirium Red gals on our latest adventures… that is if you’re accepted to follow us 😉