Today marks a week and 2 days in France and I am finally posting my FIRST blog post! I wrote this the night I arrived and I’d like to share it with you all. I already have so many great experiences and photos to share so I hope to get out more posts quickly! Thanks for being patient and enjoy! 🙂

Nobody can quite prepare you for a
homestay study abroad experience. I still can’t even wrap my head around all of
the events of today. It’s been a whirlwind and hardly anything has even
happened. On Tuesday the 6th I definitely felt ready to leave home. I was relaxed and excited for the journey, but was very unsure about the whole
speaking French part and my homestay situation. I had no idea what I was
getting myself into and I still don’t know. Currently, it’s the night of the 7th
and all I do know is that I’ve accepted a seat on a wild ride. Turns out I
don’t know that much French. I took it for four years of high school and two
additional classes in college, however, that doesn’t prepare you for the native
speaking world and culture shock. I’m totally not confident in my language
skills but my vocabulary is coming back. I have a lot of determination to
conquer French. Basically, this is the most I’ve EVER felt outside my comfort
zone and I basically got dropped into it today without any warning. Here’s
essentially how it went:

As usual for the day I leave for
someplace, it was overly stressful but everything worked out in the end. My mom
and siblings all drove me to the O’Hare International Airport and I said my
goodbyes. Since I’ve been to college before all the way out in CA it wasn’t too
bad but I started to get teary eyed saying goodbye to my mom. Very bittersweet
but I also knew that my journey of a lifetime was FINALLY here and I needed to
fully grasp it and seize what was rightfully mine. I had been a help to my
family all summer but now the rest of the year would be about me and my own
growth. Still, I will miss my family and the familiarity and comfort of my
hometown. 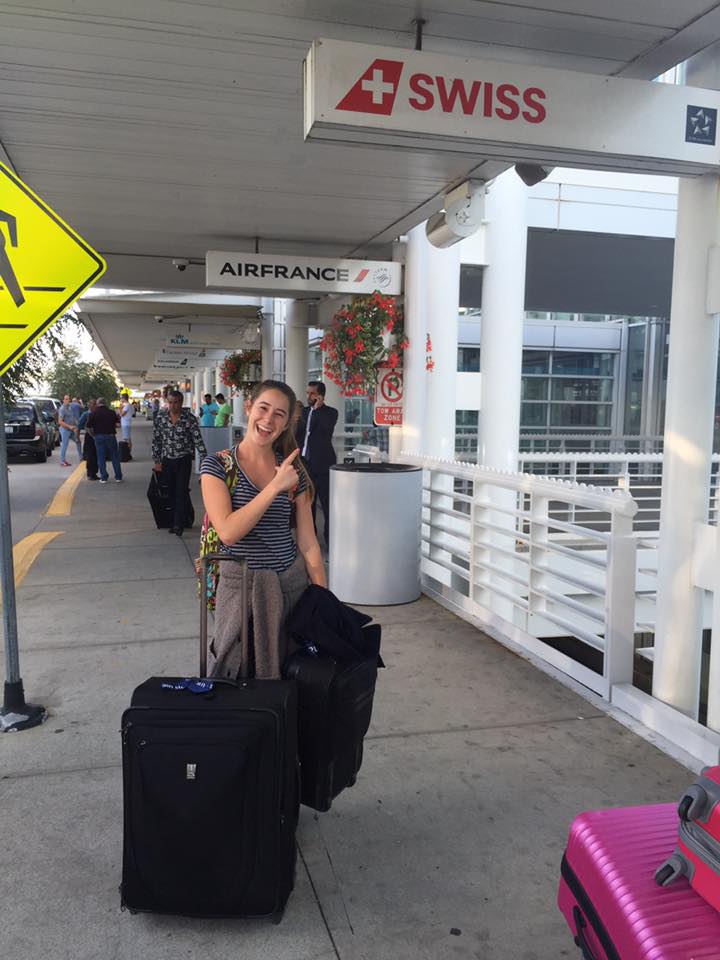 Getting through the airport was quite simple and I got to my gate
extremely quickly. I had to wait an hour and a half before boarding but at
least I was on time. The eight hour flight wasn’t too bad. I had a window seat
and sat next to this Greek man who barely knew English but he was sweet. We
talked a little after he pointed at my screen where I was watching ‘My Big Fat
Greek Wedding 2’ and he said, “That’s where I’m from!” I was served a dinner
meal which was totally mediocre and then tried to sleep the rest of the time.
It was super uncomfortable and I hardly got actual sleep but it was something.
The European morning was forced upon us by turning on the lights, opening the window shades, and being served breakfast while it
was still about 4am Chicago time. It was weird but I knew I had to switch over
to the correct time zone. So you just kind of roll with it. 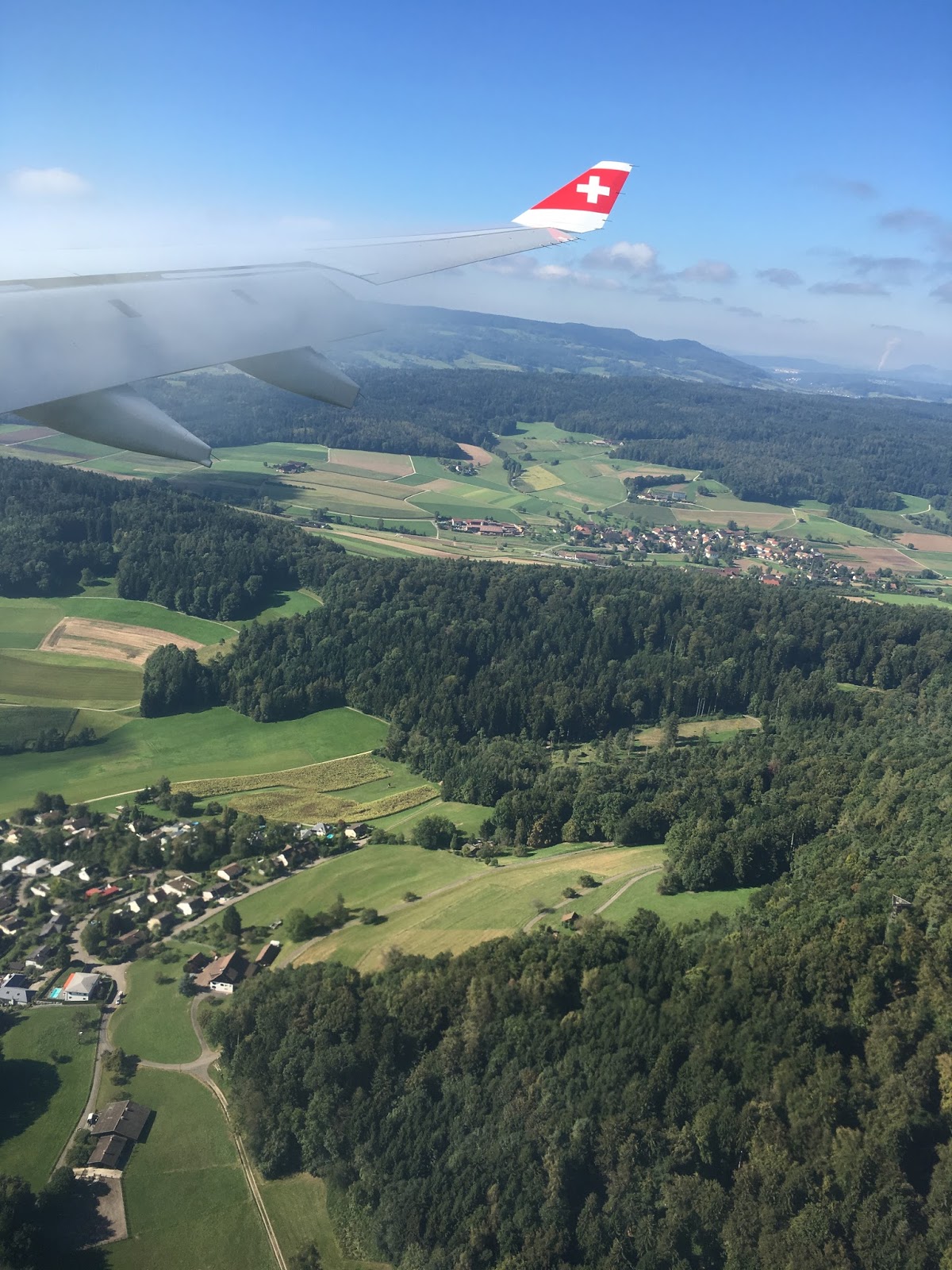 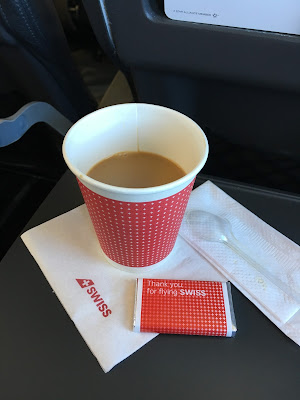 Upon landing I
realized how beautiful Switzerland was. Such lush green land, cute patches of
houses, and the majestic mountains. I had a two hour layover in Zurich where I
mostly wandered about totally sleep deprived looking at Swiss chocolate and OPI
nail polish displays. The 45 minute flight from Zurich to Lyon was so strange
because I was so exhausted that it literally felt like 10-15 minutes. I drank
some coffee and had their complimentary Swiss chocolate bar which gave me some
needed energy and caffeine.

Finally at the end of my airplane journey I met
Patrick, my program director for CEA (my exchange program), and then I proceeded to meet Heidi who’s
another CEA student from Colorado. We took about an hour bus ride from Lyon to
Grenoble and it was quite miserable. I was so hot and exhausted. On the bright
side I remember reading this one guy’s text over his shoulder and I knew
exactly what he wrote out in French which made me proud. It was so weird being
in a foreign land and I tried so hard to appreciate all I was seeing despite
that my head kept falling back from exhaustion.

At last, we were in the heart
of Grenoble. First thoughts: the town has gorgeous mountains around it but
isn’t as lush as Switzerland. There are lots of trees and nature but also it’s
so much more commercial and has a certain grunge feel to it. I actually noticed
a lot of graffiti and broken down looking areas.

Patrick, Heidi, and I stood by
the train stop and then Heidi’s apartment roommate came. Another girl from the
train spoke English and carried a Vera Bradley bag. She was going to the
university and was really nice so I hope to see her again. Another
international student from Brazil approached us as well with some questions to
ask Patrick who is the best guide to have around. That’s when I was suddenly
introduced to my host mom Anne who only speaks French. She was very nice but
meeting her made all my fears of the language barrier real. It didn’t feel real
that I was essentially left with her to go fend for myself. It was totally
nerve-racking. Patrick said not to be shy with speaking and to pull out my
phrasebook. I’m so happy I brought one of those. We walked to her car and
conversing was already extremely difficult. I couldn’t understand most of what
she said and I was nervous and felt guilty that I was doing a homestay when I
was such a beginner and so unprepared. It was awful. We drove through town a
bit and she stopped at a book store before arriving at the house. When we got
to the house she showed me around and kept speaking and I was just freaking
out. Not many words were coming out of my mouth and once I was left alone with
my suitcases upstairs in my new room, I pretty much just froze and went into
panic. At this time I couldn’t appreciate how beautiful the house was or the
perfect room with a gorgeous view I had always imagined. I was having an
endless stream of doubts about doing homestay instead of independent apartment
living or residence hall living with other English speaking International
students. I frantically texted my worries to my mom and was so thankful she had
gotten us free texting overseas for a month. I don’t think I could have made it
without her this afternoon and all her reassuring and positive words and
sentiments. I couldn’t unpack or really move at all I just stood in place and
hurriedly tried to memorize a bunch of phrases so I could be worthy of this
homestay experience. The only thing keeping me going was I knew the host dad
spoke English and I was waiting for him to arrive back from his work. He is the
reason I feel better even in this moment. He is kind, warm, and laughs too. He
speaks English fairly well and we talked pretty much the rest of the night. I
needed to speak English and it was the most comforting thing for me. I know I
can’t rely on it the whole time if I want to learn French but I’m not sure what
I would have done if he didn’t know English. They have hosted a countless
number of students before and seem like a relaxed couple. They have a dog named
Leon who is a small, white terrier. 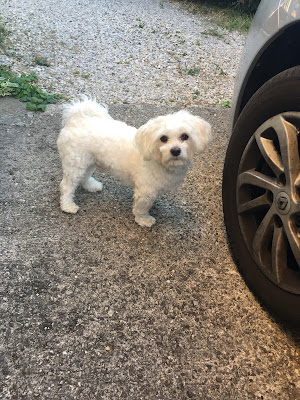 We had dinner together at 7pm and I already love the ease
and tranquility of how the French do sit down meals. The table was set with
bread and water on the table and there were three basic courses. The first was
this dish made of fresh tomatoes, white rice, corn, tuna, and some sort of
sauce. The next was just buttered pasta and then you squirted out red tomato
sauce from a tube that looked like toothpaste. It was very weird and just
tasted like tomato sauce from a can. It’s like the French version of American
squirt-able fake cheese. Lastly was the dessert which I love since it was super
healthy; A delicious fruit salad. I had heard the French have yogurt for
dessert and sure enough my host mom brought some out. Yogurt in France is
totally healthy without any sugar. I’ve been waiting to try this wholesome,
fresh yogurt since it’s like one of my staple food groups.

It’s pretty bad that
I’m still awake seeming how tired I was at 4pm. But this day was just unlike
any other. It was so weird and scary and I’m terrified for what I’ll be facing
tomorrow but that’s okay. It hasn’t set in yet that I’m here and like I said
earlier, I’m still wrapping my head around everything. I have never felt so out
of place and it’s crazy being thrown into a new culture in this way. I figure
its best I face the language barrier now then later since I do want to learn
right away. It’s just going to be so difficult and I’ll have to take it all
hour by hour and day by day. The fact that I have no idea what to expect from
tomorrow is totally part of my adventurous spirit and now I need to go to bed
and face it head on in the morning. Overall, I had a pleasant trip here and I
made it here safely so I’m extremely blessed. New challenges will present
themselves each day but here’s to my study abroad trip finally in action! I
can’t wait for everything! Tomorrow I mostly can’t wait to meet more students. Well, I’m officially abroad and definitely not in America anymore. This is all different and new. It’s crazy and I can’t believe I’m
really doing it!