When I was planning my travels for study abroad, I thought about visiting all the popular places I’d heard of – from Italy to Spain to Germany. I had never even considered Portugal- the coastal country west of Spain. I merely bought a plane ticket and booked an airbnb along with some friends and didn’t think much of it. Lisbon, however, took me by surprise. I’ll never forget the vibes I got from that city when I first arrived. That alone has always stuck with me – never before had a city changed my mood, my spirit. my attitude so quickly. 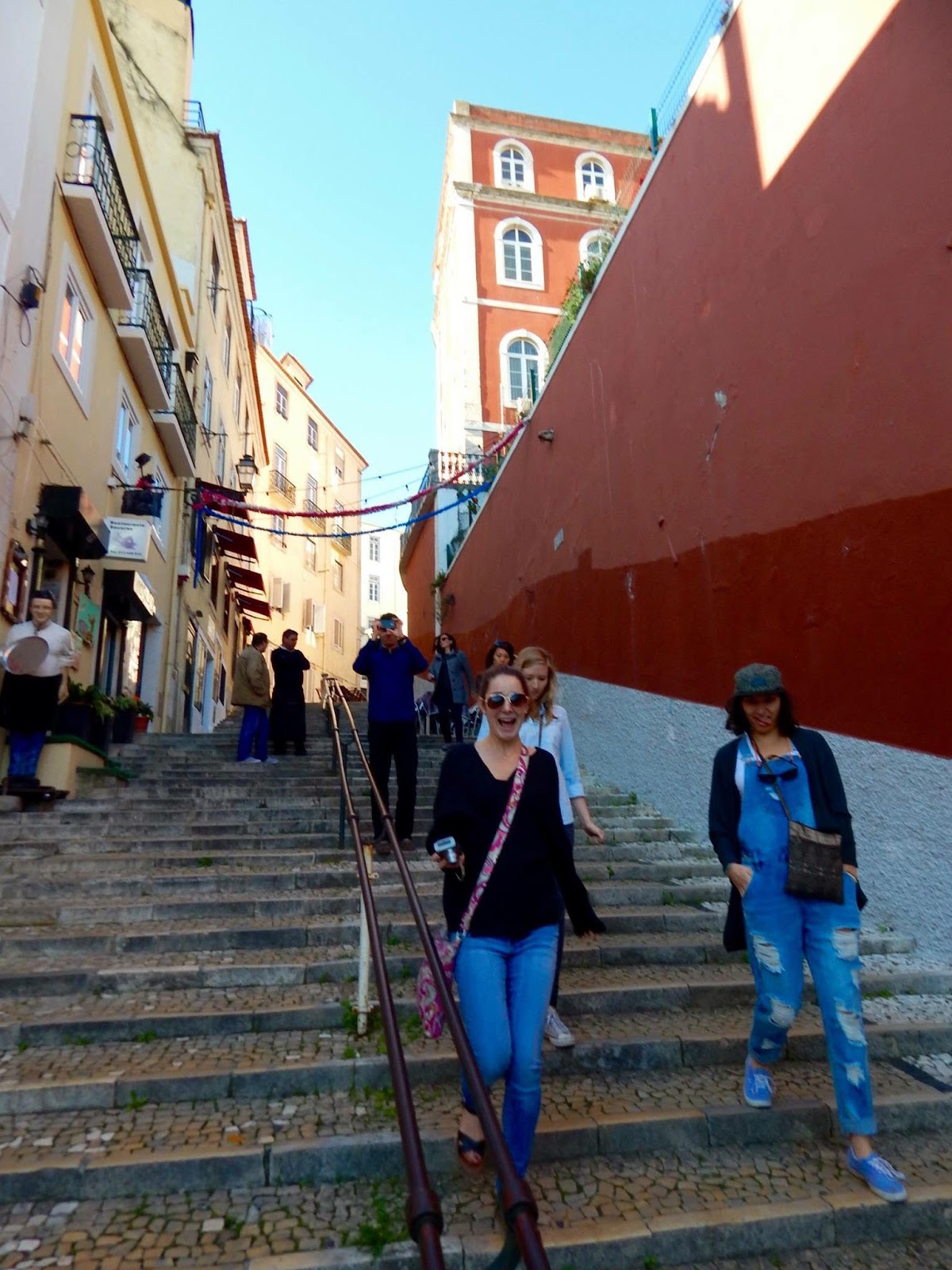 My friends and I arrived at night and the moment we walked up the stairs from the underground metro, I was suddenly uplifted into a city unlike any other. There was a certain liveliness and warmth that permeated through the atmosphere around us. I heard jazzy, lighthearted music, people were talking and drinking, and there were dazzling lights everywhere that lit up the city and ultimately boosted my spirits. I couldn’t help but smile and take in the fulfilling emotions that made up the city of Lisbon, Portugal. Of course whenever you arrive in a brand new city you are excited, but this particular intial experience was much different to anything I had ever encountered before. I knew I was in for a real treat.

It so happened that it got even better once we arrived at our airbnb. The cheap place that my five friends and I booked turned out to be spectacular, with unbeatable views of the city and ocean. The place was worth so much more than what we’d paid for, but since it was the first time ever being rented out, we experienced a major price reduction. The ceilings were beautifully caved in, the rooms decorated modern and minimalist, and it was located pretty much central to where we wanted to be. On top of that, the owner of the apartment was extremely kind and helpful giving us tips and advice on restaurants, places to see, and an extended invitation to return in the summer and ride on his sailboat! We sure lucked out on this trip – or perhaps this city eludes some sort of magic for its travelers. Turns out just being visitors didn’t capsize the alluring qualities of Portugal – for our tour guide the next day was as much in love with the city as we had begun to be. We signed up for a Sandeman tour, located in many major European cities, and we got paired with the most enthusaistic, genuine, and wonderful female guide. She had been living in Portugal for many years and was so knowledgeable on just about everything.


We learned a lot on our tour while walking throughout the main parts of the city- from why the Portugeuse are known for their tile decor and the story behind the “Golden Gate Bridge” that is Portugal’s own. Lisbon is known for their colorful, decorative tile that is lined upon building after building. It’s a gorgeous sight and gives the city much of it’s splendor, but its original purpose was actually to keep heat inside in the winter and cool air in the summer- much like a ventilation system! As for their 25 de Abril bridge, it was unintentional to match the beloved red bridge in San Francisco and is actually almost identical to the design of the Bay Bridge in CA (since the same company built them!) It was marvelous hearing so many interesting stories about this fascinating city as we walked onward for miles.


We ended up having lunch with our guide at one of her favorite, bustling with people, local spots- a place where they served the most traditional of all dishes- fish! Lisbon is on the coast so we didn’t expect anything less than fresh. I love fish but there was a catch: The Portugeuse are known for very salty fish and they adore it this way! I ordered a white fish that came with assorted vegetables and boiled potatoes and it was indeed extremely salty. I’ll also never forget our waiter who literally told me to dip mine in the oil because apparently I looked too skinny. After lunch I remember we got gelato and laid out in the sun near their famous archway, Rua Augusta Arch. I remember feeling that I was living a very good life indeed and couldn’t have imagined a lovelier day. 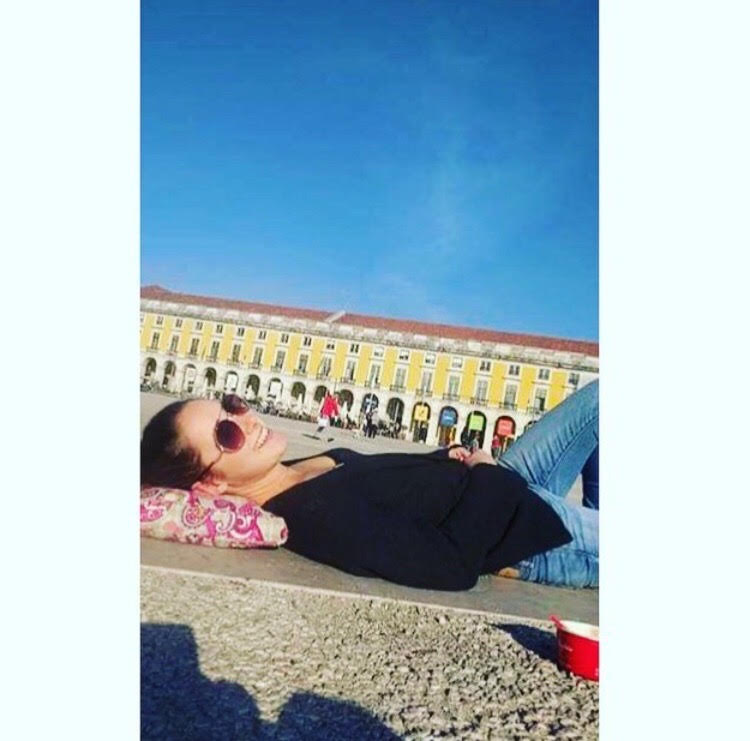 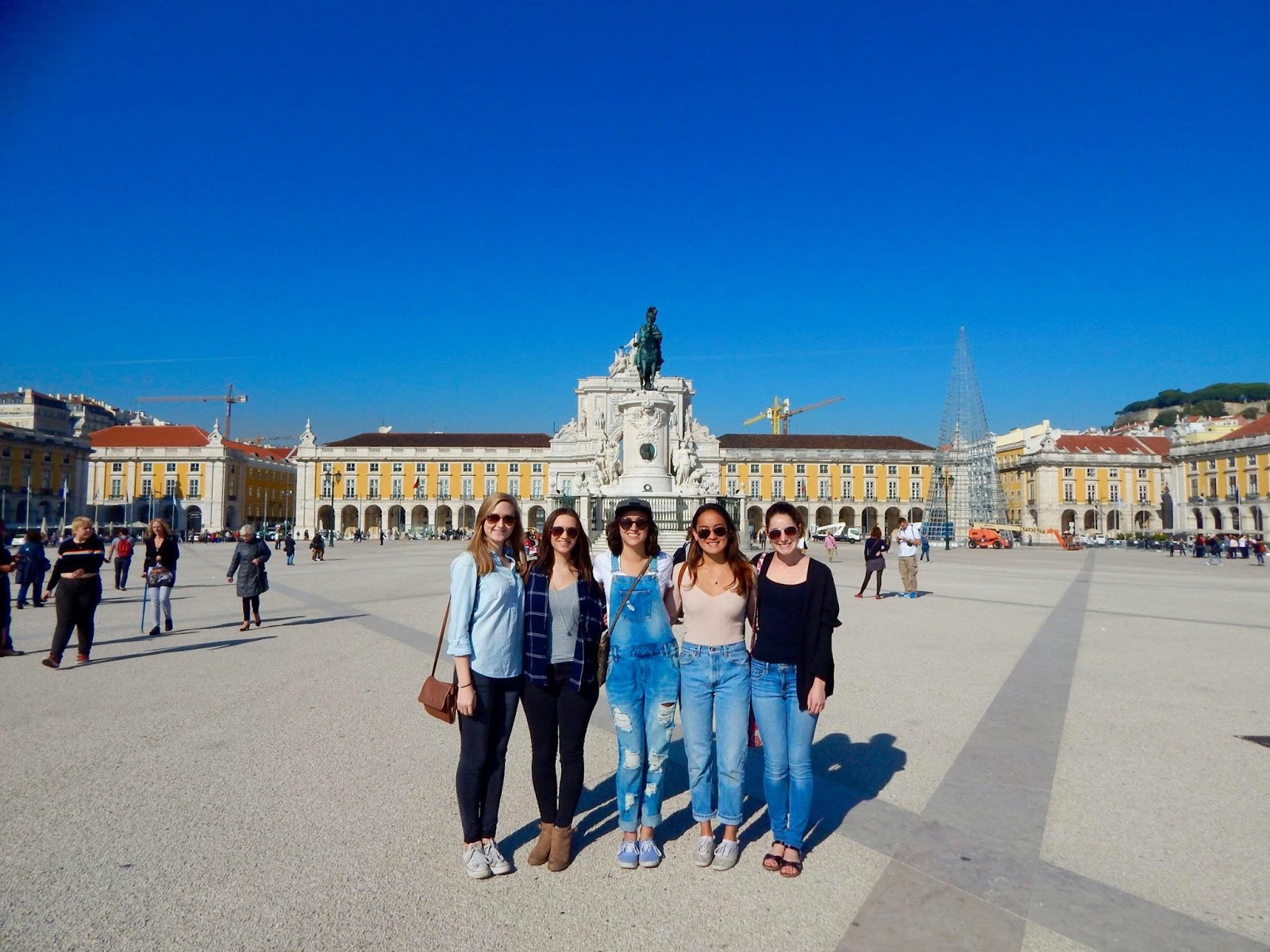 In the city of Lisbon, I loved the red rooftops, the colorful pastel painted buildings, and the mosaic pathways grounding every step I took. While sightseeing we saw the famous old elevator in the center of the city, walked past shops entirely dedicated to tins of sardines, and learned about statue code indicating the purpose behind a soldiers and horses positions. For example, two of the horse’s hooves on the ground meant the soldier died in battle. The city really came alive through its history and I sensed a culture that was deeply rooted in a way of life only understood by the locals. Portugeuse is a language similarily compared to Spanish, but is much different. The strangers I met were friendly and everyone seemed to be happy in this intoxicating city. It bursted with life, passion, and an energy that can only be felt to be understood. 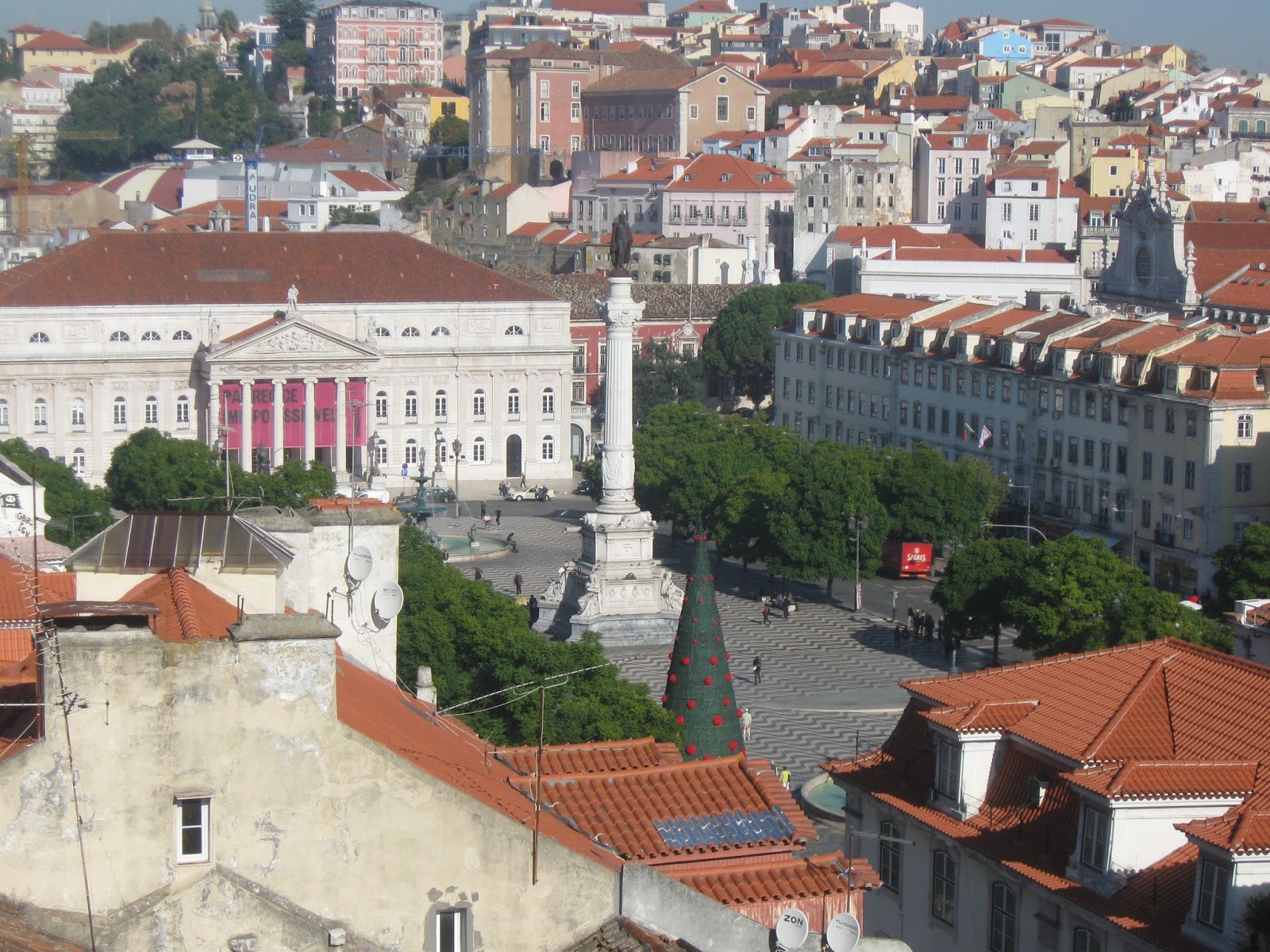 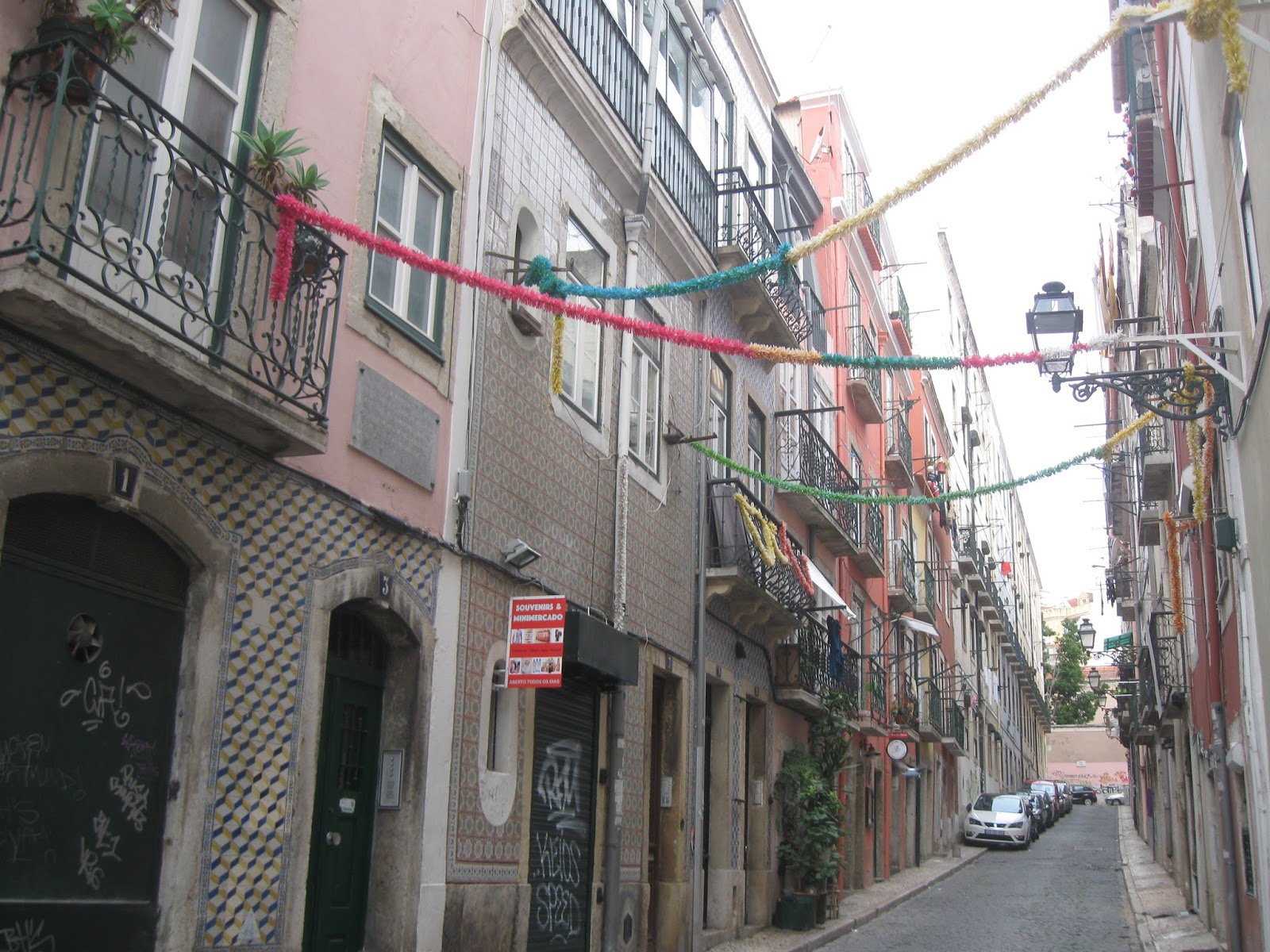 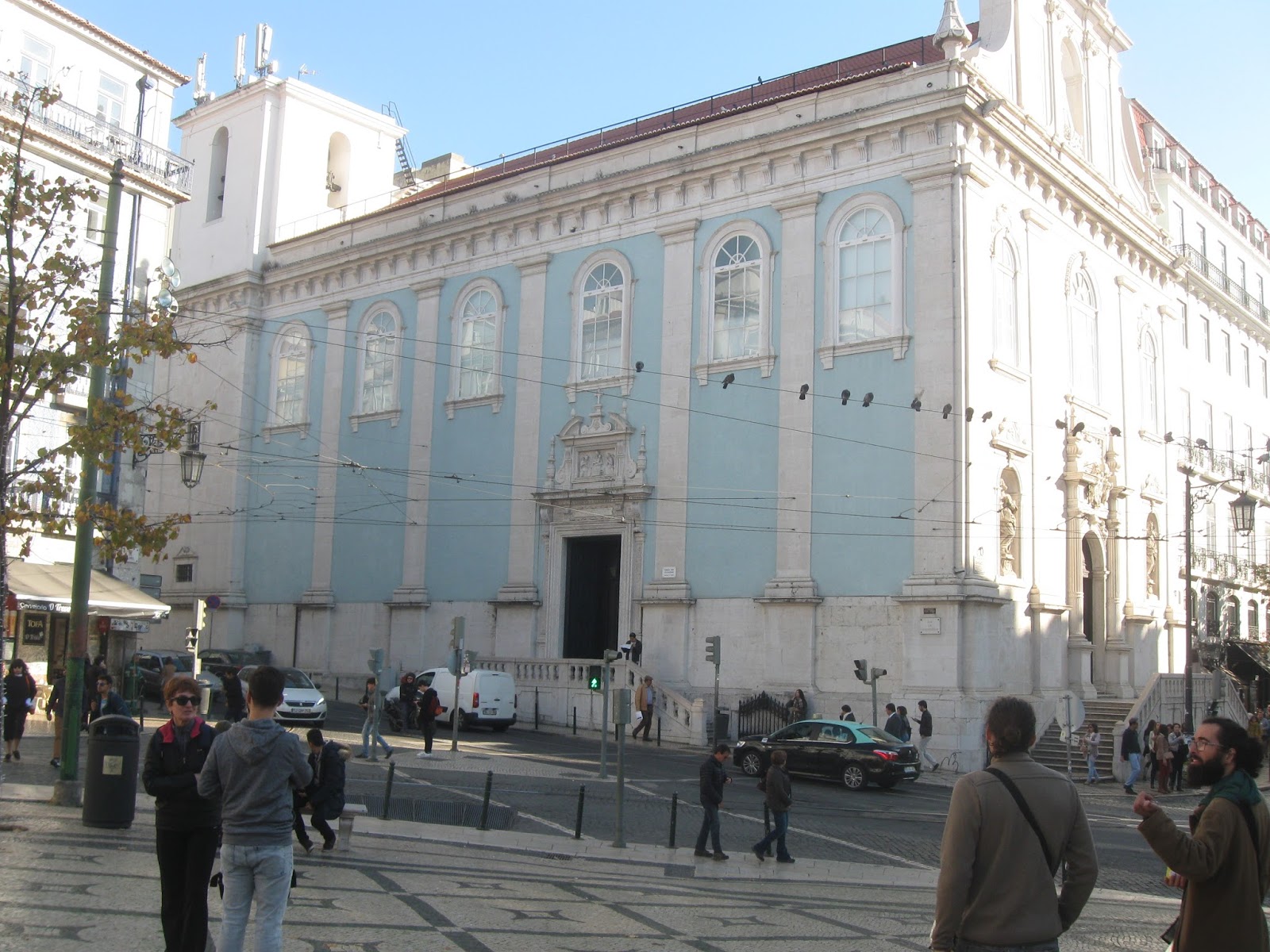 That night we rode on one of the oldest trolley cars in the city that took us up to the many viewpoints -or miradouros– where we watched a gorgeous sunset set on the glimmering ocean. Better yet, when we got home we could witness Lisbon by night from our very own view out our bedroom window.


Nightlife in Lisbon is quite famous and their most popular street for young adults is the Bairro Alto. Bars lined the entire street serving cheap beer, mixed drinks, and giant mojitos as big as your face. The city truly comes alive at night and we had a great time mingling in the upbeat scene.


My first every pub crawl happened to be in Lisbon and it was certainly an adventure for the books. I remember how loud, boisterous, and exciting the streets were at night with the sights and sounds of people drinking and laughing. My friend who I went with will never forget my drunken revelation about how, “We’re in Lisbon! What is life?!” A comical, yet accurate depiction of how I was feeling, being in the place I claim now as the most underrated city in Western Europe. I believe this to be true, for what I experienced there was unlike any other place I’d been before. Lisbon is a seaside society positioned on the edge of the contintent, capable of elevating all of one’s senses, beckoning with an irresistible vibe that envelopes the entire city. I await the time I can return and relish in one of my top favorite places I visited while being abroad! 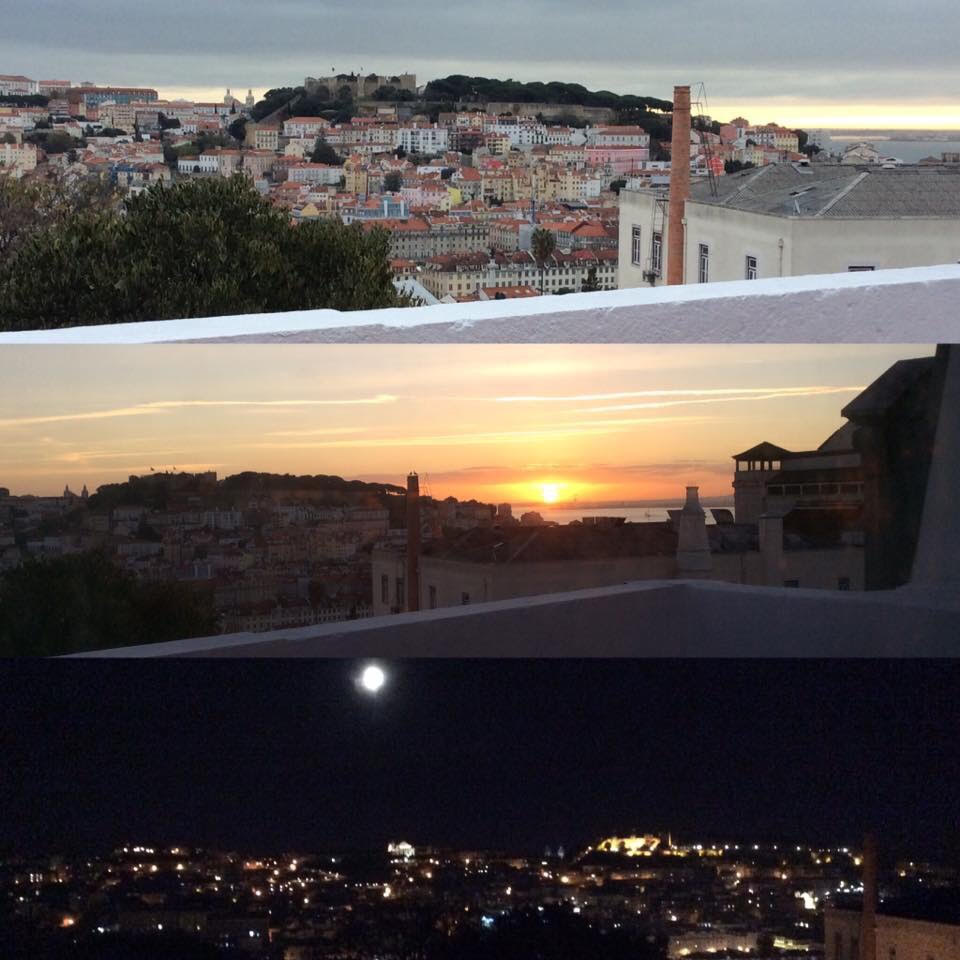