What do you think of when you hear Berlin?

For me, I think Germany’s capital, underground clubs, and the iconic statement from John F. Kennedy, “I am a Berliner” during one of his famous speeches in West Germany in 1963 (which actually is the name of this jam or cream filled donut in Germany): 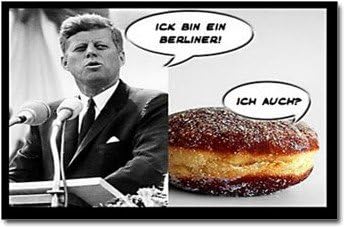 In addition, I encountered countless stereotypes about Berlin that shaped my thoughts and opinions about it prior to even visiting myself. It is often inevitable to avoid these stereotypes, but what I commonly hear are: it’s not a pretty city (as in architectural), it’s very industrial, and it is cold (weather wise as well as figuratively).

That being said, Berlin surprised me. In a good way. I not only found it to be notably beautiful, but the history itself is so rich and fascinating. The history consists largely of East Germany, the Nazi regime, and the Stasi Russian spies.

This blog is focused on the city of Berlin itself, my observations, and unique experiences! To begin, here’s what I observed:

Now the fun part, everything I did in Berlin!

The SO/ Berlin Das Stue is an elegant and posh hotel in a quiet area just outside the hustle and bustle of the city. It’s right next to the Berlin Zoo and a giant park perfect for walking or jogging through. It’s also right beside the Spanish embassy! Since my German boyfriend was there for a business trip, I got to tag along for the final night of his stay and experience a wonderful hotel experience there.

The main entrance of the hotel was my favorite part. It’s so elegant and they have many statues like of the alligator head in the photo below influenced, I believe, by their close proximity to the zoo. Past the main entrance was a fine sitting room with a bar and restautant. The rooms themselves were modern and sophisticated featuring a beautiful bath tub splitting off from the shower. In addition, the morning room service breakfast was absolutely top notch. The best part were those sea salt crystals meant to be sprinkled on the scrambled eggs. Mmm!

This was probably my favorite part of the whole trip. Surrounded by beautiful government buildings and domes, the location could not be more perfect for the eye. The Germans call it the Christmas Magic market or “WeihachtsZauber Markt” and it truly feels magical. To enter, we waited in line for about 15 minutes and then finally got to experience everything. There are white tents / stands that sell special food, beautiful ornaments, Christmas decorations and more. We had plenty of Guhwein or hot wine and then tried the “flammkuchen” which is basically a traditional, flat pizza with onions, bacon and cheese. Very tasty!

When you first approach this memorial, it looks rather small and just a bunch of grey, cold blocks. There are also no signs explaining what it is, so you just have to experience for yourself.

However, once you start walking in through the blocks, you realize you’re going downhill and the blocks get taller and taller until they are hovering over you. My first feeling was that it is trying to help you fathom the amount of lives lost, and it shows you that in a deep way, amost overwhelming and all-consuming. If that was the goal of the memorial, I think it is very well done and thought-provoking. I also was reassured to see that not one block was vandilized in any way and that nobody was climbing on them. Definitely nice to see that respect towards this memorial.

This musuem may seem a little dry since when you intially walk inside it’s just a bunch of informational posters, but once you start reading, it is like going back in time and reading these accounts of information and people’s experiences that are harrowing yet informative. You can leave there really understanding or at least put some facts behind how Hitler came to power and how the Holocaust came to be. It definitely got a little heavy through some darker stories and photos, but it’s important nonetheless to educate yourself about.

I really didn’t know the horrors of the Stasi and neither of this prison before coming here, but it really showed what a cold, terrible time this was in this part of the world. Our tour guide was very informative, and even some tour guides are ex-prisoners of the establishment.

We were walked through the prison chambers and the rooms which they held the interogations. We heard the stories of how the prisoners came to be there, how they were treated there and finally the time the prison was shut down.

At the end of the tour, you can visit the bookstore which holds a very enriching book selection, many of which are in English and could learn a lot more about the Stasi.

Overall, visiting Berlin in early December was a really enriching experience. I may not have gotten to witness these mysterious underground clubs, but Yannick and I did find a GIANT Irish pub hidden inside a sketchy mall LOL. It was crazy busy and loud, so it must be one of those hidden gems you find along your journey.

I hope after reading this you’ll say yes to that trip to Berlin. You won’t regret it and you’ll learn so much about former East Germany and all the wild history present in the city.

Where will I flutter to next? Stick around for more coming soon.